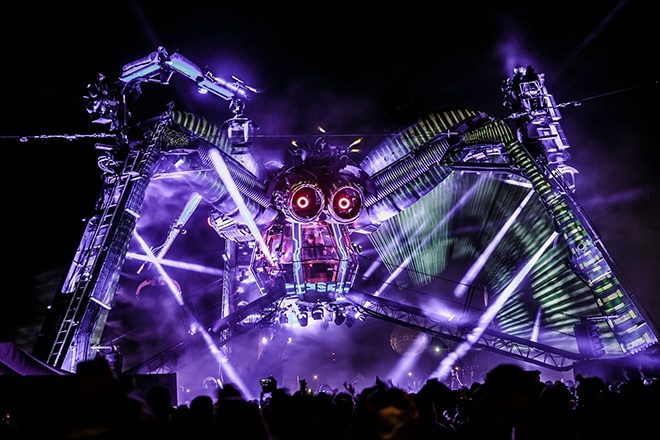 One of Glastonbury’s most famous music installments, the Arcadia Spider, will not appear at the 2019 edition of the festival.

Despite this, the creators behind the massive fire-breathing spider stage have revealed that they are currently working on “a totally different adventure” that they claim will “raise the bar” at Glastonbury 2019.

“We’re currently neck deep in scrapyards and as excited as everyone else about what we might find next,” said Arcadia Spectacular founders Pip Rush and Bert Cole during a chat with Somerset Live.

Glastonbury organizer Emily Eavis told NME that new plans she’s seen from Arcadia Spectacular are “quite radical” and that the festival will be spreading out Block 9 this year to give them more space as they’ve got “some pretty mind-boggling ideas that we’re putting into action.”

As the Glastonbury 2019 announcements continue to roll in, Stormzy has been announced as the festival’s first headliner.

Tagged under: ARCADIA SPIDER TO BE REPLACED BY "TOTALLY DIFFERENT ADVENTURE" AT GLASTONBURY 2019