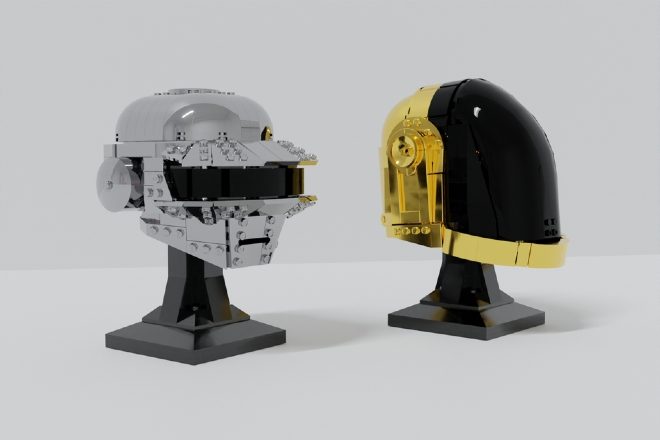 A creator has submitted a design for LEGO Daft Punk helmets to be selected for the next batch of LEGO collectible items.

LEGO has an initiative where creators can submit ideas that they believe would make good collectibles for the future. The toy-maker accepts votes, and in order to be evaluated by the LEGO team, each creator must have at least 10,000 subscribers for their product to be considered.

Eliot O ’Brien submitted a model idea of the signature Daft Punk helmets to the LEGO website. As of today (March 1), he has over 4880 supporters.

The figure created by ‘Brien appears to be a flawless portrayal of the electronic duo. While the hand-held component is small and appears to be perfect, O’Brien admitted that modelling the curvatures of the delicate helmets was tough.

In his submission page, he wrote: “The mainly-curved shapes were a great challenge to figure out with Lego bricks, especially with Guy-Manuel’s helmet, though the windscreen from the UCS Slave-I proved to be an invaluable asset. Though the builds use a lot of chrome pieces, they could be substituted for the more common flat silver and pearl gold colours without compromising too much on the overall look.

“I am a huge fan of Daft Punk’s music and would personally love to see an idea like this become an official set. If you also enjoy listening to the band, music in general or would just like the helmets as a display piece, please consider supporting the project!”

The show was part of Daftendirektour, the first live concert tour helmed by  Daft Punk across January to December 1997, which is when the live album ‘Alive ‘97’ was recorded.

Tagged under: DAFT PUNK HELMETS COULD BE AVAILABLE AS AN OFFICIAL LEGO COLLECTIBLE SOON The future of gaming in electronic music