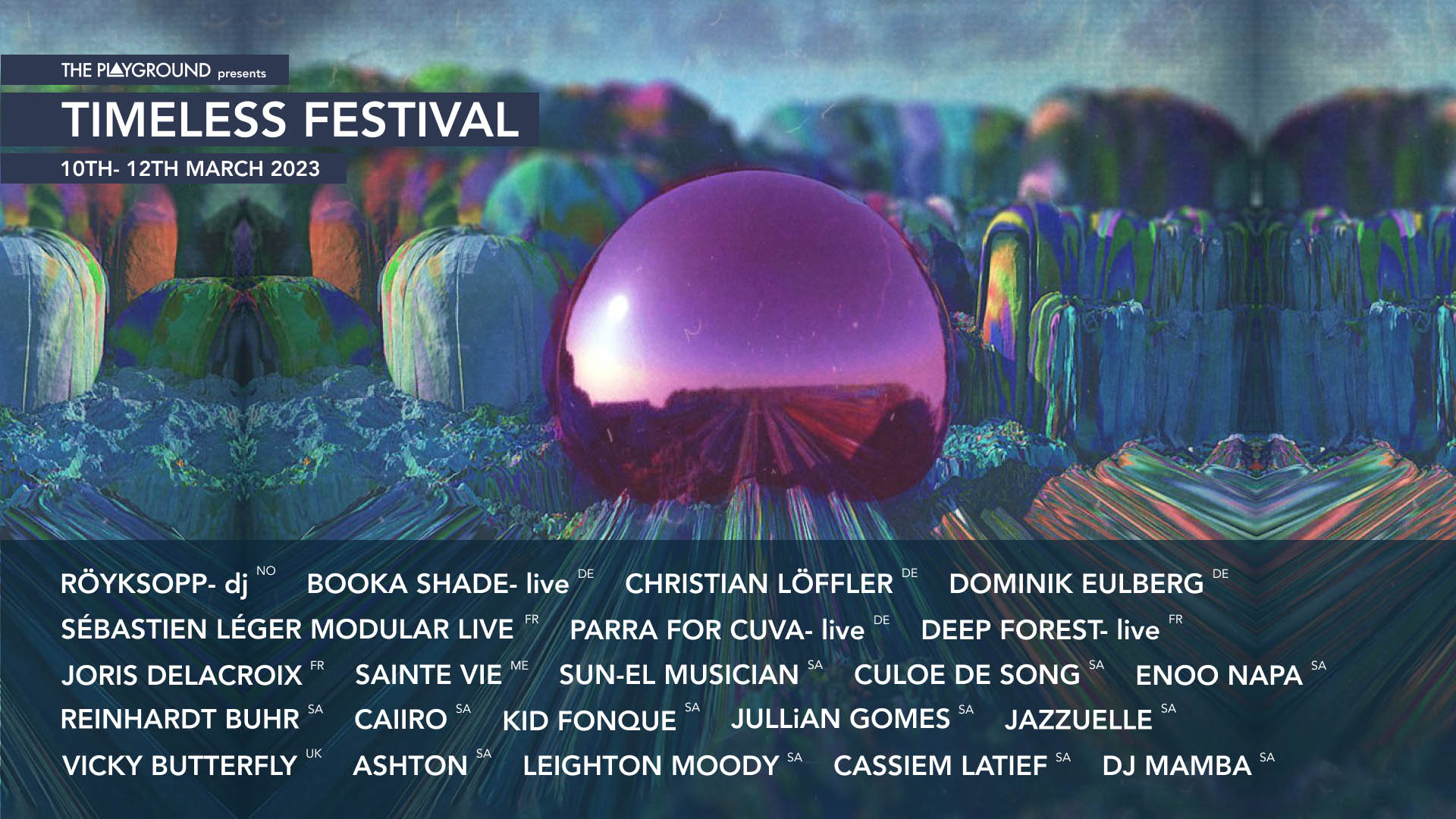 THE PLAYGROUND is pleased to announce the launch of its inaugural festival in Cape Town, South Africa between the 10th and 12th of March 2023 to be hosted at the foothills of the Greyton mountainscape on Elandskloof Farm. 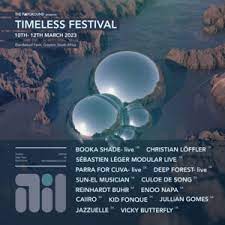 Recognised as one of the UK’s top promoter driving forces across the last 14 years, behind artists such as Ed Sheeran, Ben Howard, FKJ amongst many more whilst hosting hundreds of events at London’s top venues.

The 3 day camping festival is set to bring some of the most influential and groundbreaking acts to one of the most idyllic settings in South Africa. Tickets are limited so grab early birds before they sell out.

GET YOUR TICKETS HERE

Behind artists such as Ed Sheeran, Ben Howard, Crystal Fighters, Franz Ferdinand, FKJ, Pendulum, and Steve Aoki among others, and recognised as one of the UK’s top promoter driving forces across the last 14 years, The Playground has hosted events at London’s top venues and won numerous accolades from The Guardian, Time Out, and NME Magazine to mention a few, with DJ Mag naming them “One of London’s most audacious music forces”. 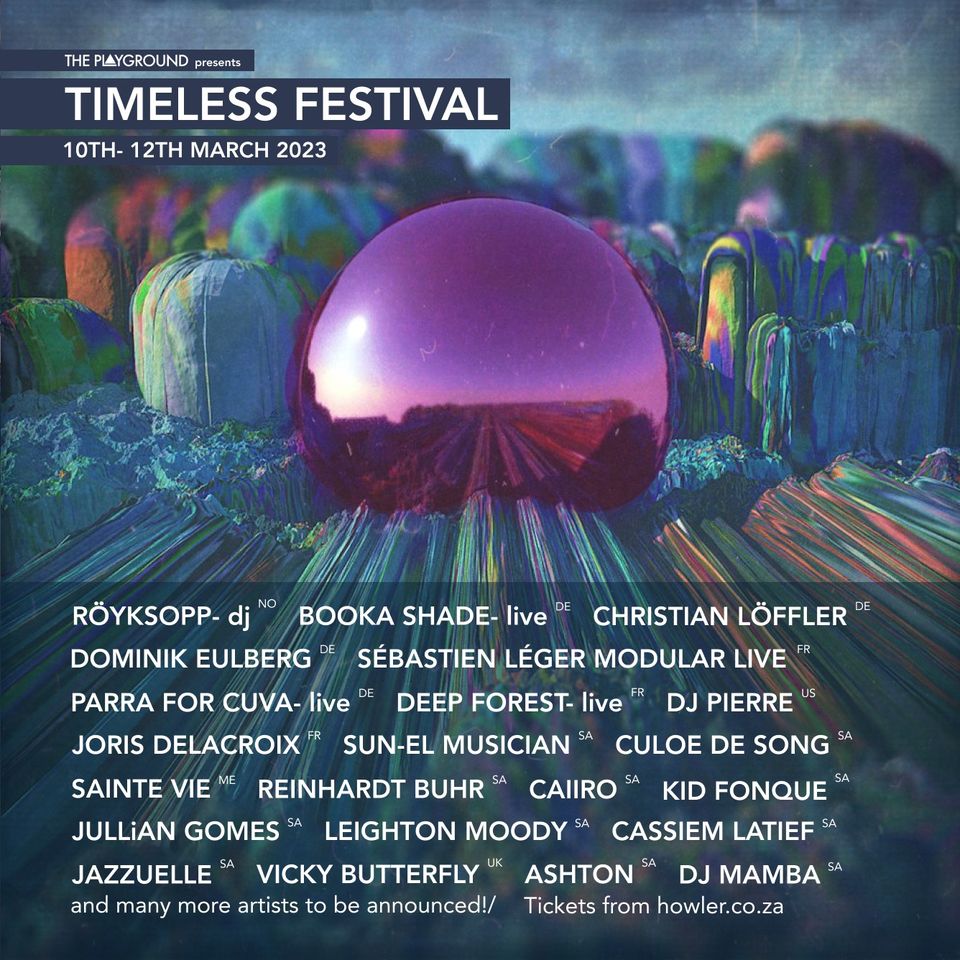 The 3-day camping festival is set to bring some of the most influential and groundbreaking acts to one of the most idyllic settings in South Africa. Tickets are limited so grab early birds before they sell out.

► RÖYKSOPP- [DJ] Norwegian electronic music duo from Tromsø formed after experimenting with different genres of electronic music. Stylistically, the band makes use of various genres, including ambient, house music and synth-pop. Since their debut, the duo has gained critical acclaim and popular success around the world. To date, Röyksopp has been nominated for two Grammy Awards, won seven Spellemannprisen awards, performed worldwide tours, and produced albums that have topped the charts in several countries, including four consecutive number-one albums in their native country.

► BOOKA SHADE- [LIVE] With a reputation as one of Europe’s most celebrated electronic acts, the Berlin-based duo has opened for Depeche Mode and headlined stages at Coachella, Glastonbury, Rock Werchter, and Red Rocks to name a few. Fast forward 20 years, 6 albums, and dozens of EPs later, the duo has become more than a household name.

► DOMINIK EULBERG– Dominik Eulberg from the Westerwald has been active with his music worldwide for more than 25 years. In the meantime, his discography features over a hundred releases. He has received numerous awards for his musical work, such as the German Record Critics’ Prize, was voted Music Producer of the Year by trade magazines and regularly occupies top positions in the DJ category.

►PARRA FOR CUVA- [LIVE] (Debut South Africa show) Since the release of debut EP ‘Fading Nights’ in May 2013, the German producer has risen to prominence with a catalogue of slow, well-crafted and melody-laden electronica.

► DJ PIERRE – The legendary godfather of Acid House will be flying from Chicago to grace SA with his signature blend of squelching synths and forward-driving percussion. He is the founder of the group Phuture, which released the single “Acid Tracks”, the single that is often cited as the song that gave the genre its name.

► DEEP FOREST- [LIVE] (Debut South Africa show) A viral sensation during the ‘90s with their signature anthem “Sweet Lullaby”, the band’s production style placed them on the world stage where their associated first album reached gold, platinum and double-platinum status in numerous countries. Deep Forest became the first French artist to win the prestigious Grammy Award for their album Boheme, sharing the honour with Daft Punk exclusively. Eric Mouquet innovated Deep Forest’s distinct ethnic-driven sound and is one of the few unique pioneers of electronic music, who defined world music and shaped the all-new genre of ethnic-electronica.

►  CAIIRO- Is a house DJ/Producer from South Africa. The rhythmic & emotional elements in his songs have had him travel the world. He has worked with renowned artists such as Black Motion, Da Capo, Msaki, and Djeff to name a few.

►  KID FONQUE- The DJ/producer, label owner, promoter and National radio host has become a vital part of South African electronic music and club culture over the last 20 years. Fonque’s palette embraces everything from Bass and Broken Beats to Bossa Nova, Hip Hop and every shade of House.

►  JULLIAN GOMES – Jullian Gomes was brought up listening to Soul, Latin and Kwaito, before discovering House music at the tender age of eight. Since his first gig in 2003, his career has travelled only upward, and his love for production and skill-set grew steadily with it.

►  JAZZUELLE – The Red Bull Music Academy Bass Camp Alumni has opened the first ever Sonar Festival in Johannesburg and performed at festivals such as the Sonar Festival (Barcelona), Beatport’s Wet Deck Annual Party  (Barcelona), and the Get Physical Music showcase at City Hall (Barcelona). With a myriad of releases as early as 2010, Jazzuelle has been one of the most consistent South African producers.

►  REINHARDT BUHR [LIVE]- makes use of a live looping pedal to record his Spanish guitar, electric cello, electronic drums and Australian didgeridoos, building layer upon layer until it sounds as if you are listening to a big instrumental orchestra, creating rhythms and vibes that evoke restlessness in your body.

For all press and radio enquiries please contact / pr@theplayground.co.uk

The Playground’s Director, South African born and bred; Warren Morris is also available to answer any questions you might have or share some quotes for the article. 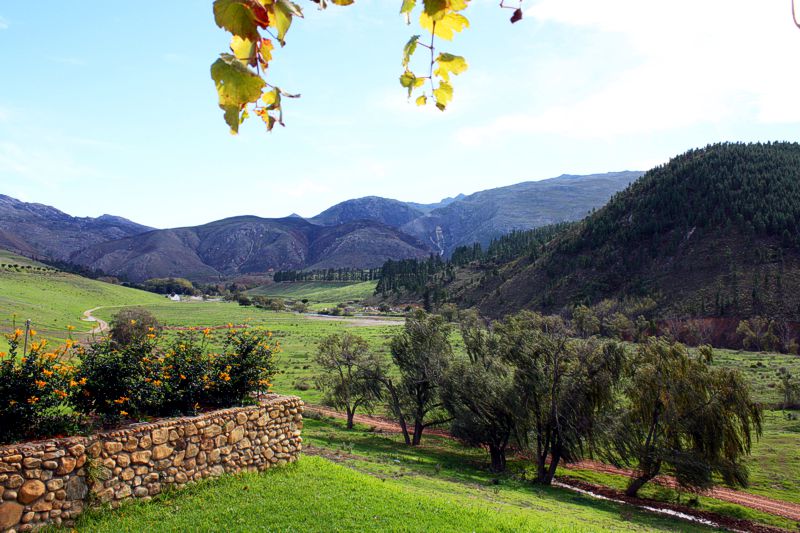 5 OF THE BEST BUDGET ALTERNATIVES FOR HARDWARE STUDIO KIT ROLAND ADD THE 303 TO THEIR CLOUD PLUGIN SERVICE