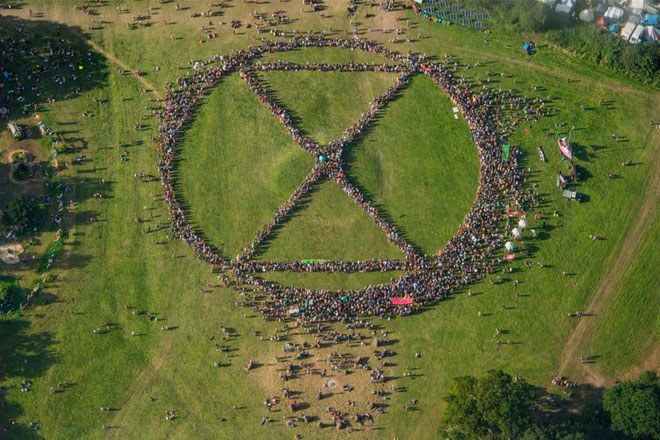 Thousands of festival goers have joined Extinction Rebellion and Greenpeace in calling attention to the climate emergency by staging a procession across Glastonbury.

The march began at the Park Stage, and culminated at the Stone Circle, where they formed a human sculpture of an hourglass – Extinction Rebellion’s emblem, symbolising how time is running out for the planet.

The campaigners were also joined by indigenous people from across the world who have long been leading the fight against global warming.

The procession lasted about an hour, with many holding placards and waving flags bearing the extinction symbol, and the pink boat that was used in the London protests back in April this year made its return too.

The Guardian reports that the founder of Extinction Rebellion, Dr Gail Bradbrook addressed the crowd saying: “[Extinction Rebellion] is not a protest. It is not a campaign. It is a rebellion. We are in active rebellion against our government. The social contract is broken, the governments aren’t protecting us and it’s down to us now.”

She emphasised that people’s realisation and recognition of the climate emergency is “a shift in the consciousness of each of us[…]It is a collective shift. It involves facing grief and trauma and undoing our numbness and our narcissism and our indulgence that we have in this privileged western society.”

Festival organiser Emily Eavis has instigated a ban on single-use plastics on site and festival-goers are being encouraged to bring reusable water bottles and take advantage of the 800 taps, 37 WaterAid kiosks and 20 refill stations available. Non-compostable plates, cups and straws are also not allowed.

Visitors are being urged to use public transport to get to Worthy Farm, not leave their tents behind, opt for biodegradable glitter rather than plastic, and to bring wash cloths and soap, as opposed to non-biodegradable wet wipes.

Emily Eavis also invited 12 tribal elders, leaders of indigenous tribes around the world, known as the Wisdom Keepers, to perform a ritual officially opening the 49thGlastonbury Festival, aiming “to catalyse festival culture for climate awareness”, and draw attention to the sustainability and harmony of the ways that indigenous cultures live.

Tagged under: EXTINCTION REBELLION AND GREENPEACE STAGED A CLIMATE CHANGE PROTEST AT GLASTONBURY ARMIN VAN BUUREN – TRANCE EVOLUTION & THE DARK SIDE OF SUCCESS