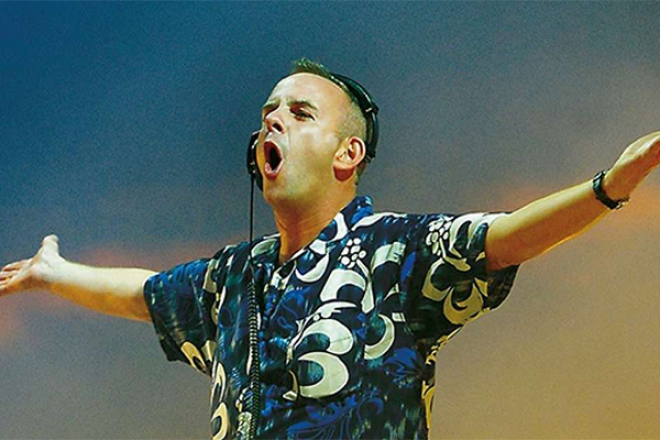 In a new Netflix documentary, the veteran DJ talks about the “terrifying” moment a van drove into the crowd during the infamous festival

WARNING: This article includes an account of sexual violence and may be distressing for some readers. Resources for support are listed at the end of this article

Fatboy Slim has described the “terrifying” moment a van drove into the crowd during his set at the now infamous Woodstock 99.

The interview is part of a new documentary on Netflix, Trainwreck: Woodstock 99, which documents the shocking details of one of history’s most disastrous festivals.

Originally set to be a “love-filled” 30th anniversary of the 1969 original, Woodstock 99 instead is best known for its organisational negligence, violence, stories of widespread sexual assault and rape, vandalism and lawlessness.

The festival, which took place from July 22-25 1999, had failed to provide adequate water, food, toilets or security for the estimated 400,000-strong crowd — fostering resentment from the masses towards organisers.

The chaos came to a head on the festival’s Saturday afternoon during Limp Bizkit’s headline set, during a performance of ‘Break Stuff’ the crowd began to tear scaffolding and festival structures apart and turned on festival staff.

Fatboy Slim, real name Norman Cook, had been scheduled to headline the “rave hangar” on Saturday evening, unaware of the festival’s inability to control hundreds of thousands of unruly attendees headed his way.

“I’d been closeted in my dressing room all afternoon with people just going, oh it’s a bit chaotic out there” he recalls. “But no one had told me there’d been any damage, that there’d been any violence.”

In archive footage, he’s seen stepping up the decks and opening with ‘Fucking in Heaven‘, getting just a few tracks into his set before it became clear that something was wrong: “I became aware of something that I thought was a kind of floating dance platform, like a podium, with about 20-30 people on it, which turned out to be a van.”

The vehicle, stolen by a gang, was ploughing through the rave hangar crowd towards the stage.

“Then I got the tap on the shoulder, and it’s like: ‘We gotta stop the music. The vans gotta go, and I said ‘Aw, not tonight. You know this is Woodstock. It was all going so well.”

The crowd quickly turned on Cook, throwing bottles, rocks and batteries toward the booth. “That was literally the moment when everything started to look a bit less fun.” he says.

Trainwreck also speaks to “rave hangar” stage manager AJ Srybnik who relives the moment he finally reached the van only to discover the driver’s “eyes glazed over.”

After opening the side door of the van Srybnik found a “rusty machete” and ” a girl that looked maybe 15 or 16 years old” who was undressed and unconscious and “a guy in the back with her who was putting his shorts back on.”

“I was floored,” Srybnik says, realising he had just witnessed a serious sexual assault. “It took the life out of me.”

“That’s just hideous to think that in the midst of all those people having fun and me wanting to make everybody love each other,” Fatboy Slim says “that that was going on literally under our noses.”

Cook describes how he quickly made an escape from the festival with his whole team “rattled,” choosing not to remain on site — leaving behind his records and equipment — and getting into a car and heading to a nearby airport, where he “slept until his flight the next day.”

“The adrenaline was going out of my ears, I did exactly as I was told and I ran.”

Trainwreck: Woodstock 99 is out on Netflix now.

Tagged under: FATBOY SLIM RECALLS DISASTROUS WOODSTOCK 99 SET: "I DID WHAT I WAS TOLD AND RAN" THE ICONIC ROLAND TR-909: THE HISTORY OF THE INFLUENTIAL DRUM MACHINE