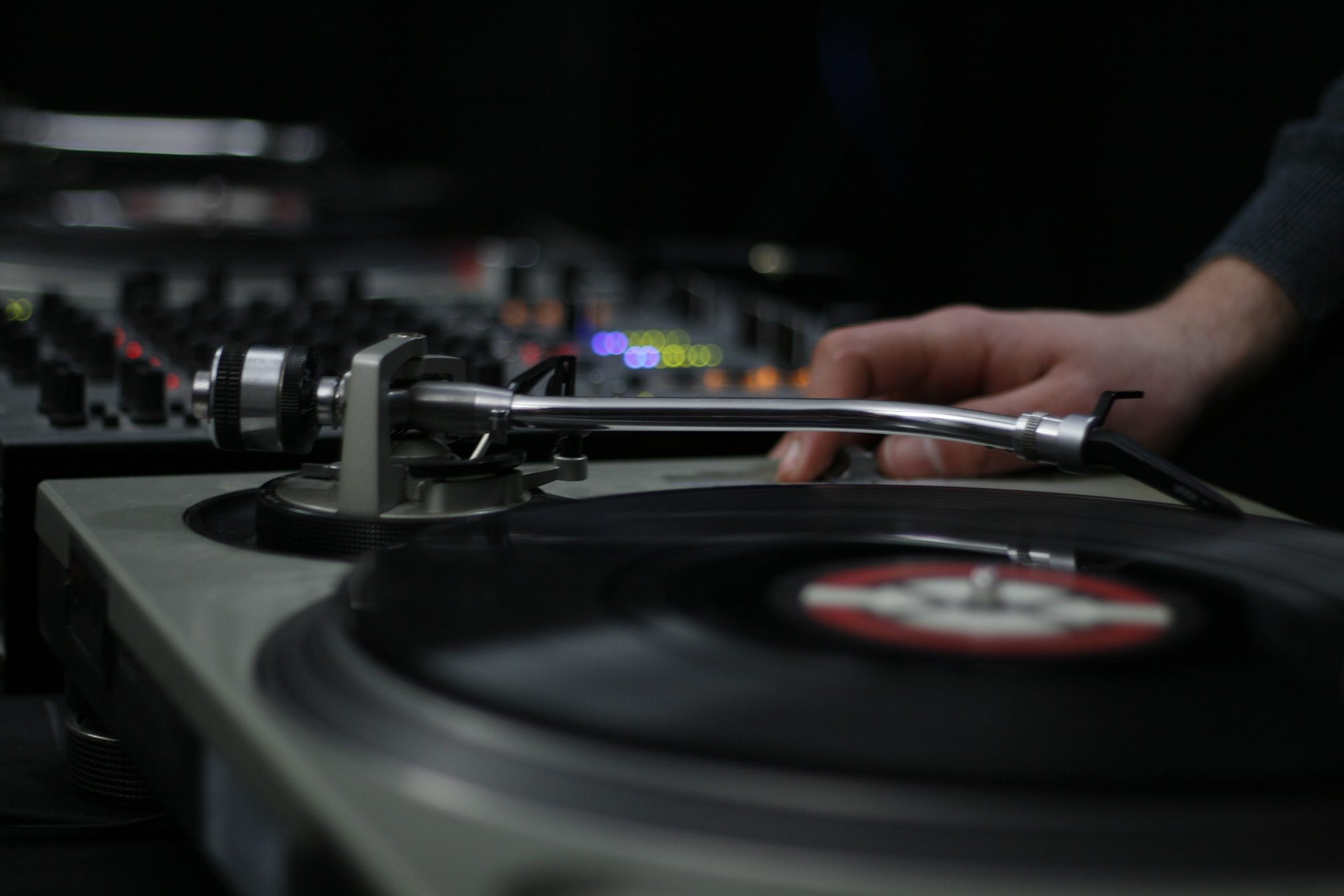 DJs are blessed with a wealth of options when it comes to buying turntables these days, with the market experiencing a surge in growth and innovation running parallel to the vinyl resurgence. When it comes to deciding what DJ turntable is best suited for you, there’s a few factors to consider, such as the style of music you play, the price you’re looking to pay, and the functionality you want. Like our recent best turntables list, which ran through a number of different needs ranging from audiophile record players to portability (as well as DJing with some double entrants here), different DJ-specific decks will suit different styles. Whether you want an old-fashioned style workhorse or a hybrid digital turntable to pull tricks that would blow the mind of a 90s raver, we’ve picked out some of the best options in the guide below. 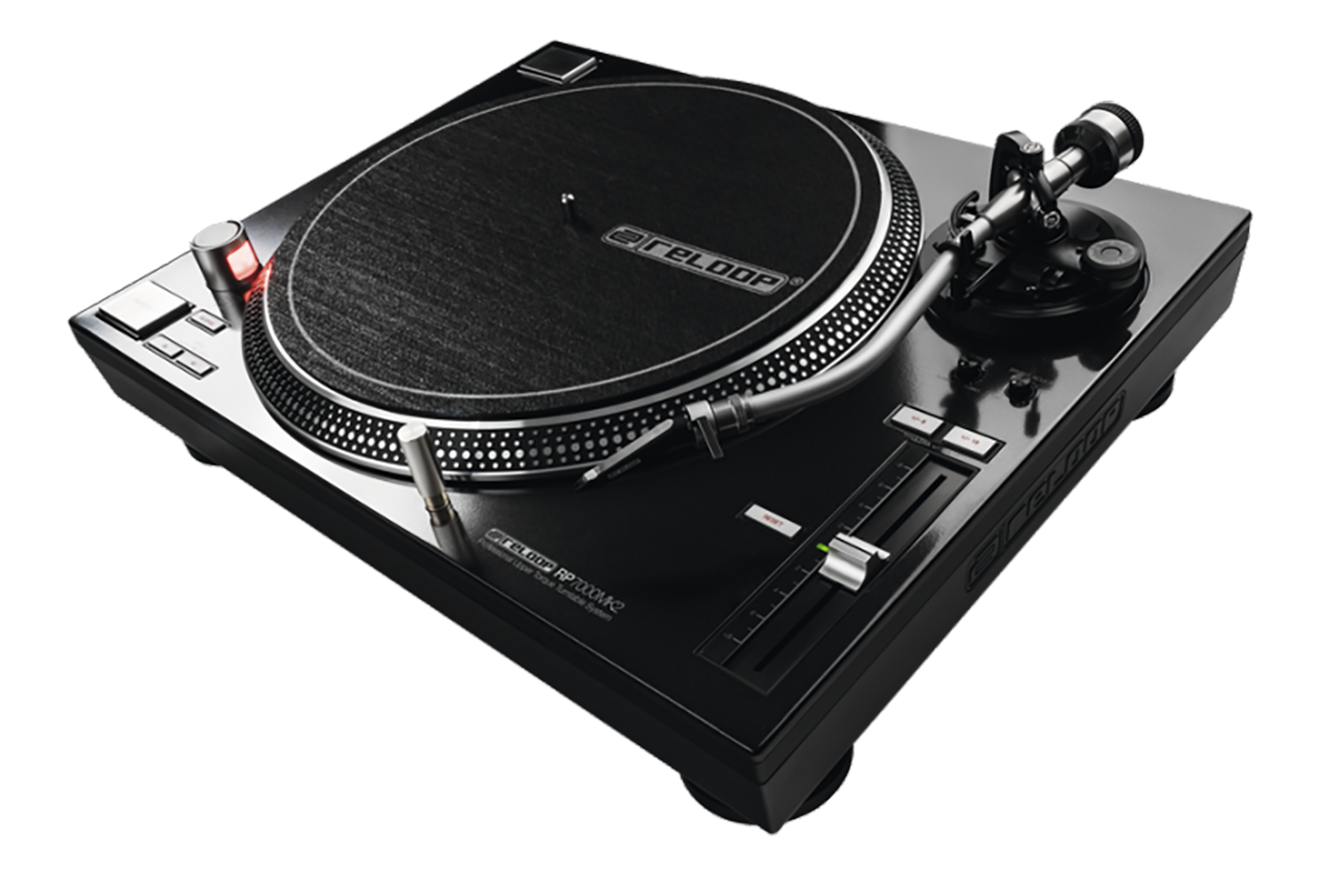 The Reloop RP-7000 Mk2 is an exceptionally well made turntable, offering three motor speeds and ultra-pitch range up to +/- 50%, allowing for some serious turntablist manipulation. The statically balanced S-shaped tone arm with hydraulic lift and an anti-skating mechanism is secure in its stabilities, and Reloop describes the chassis made out of metal, rubber and synthetic material as “indestructible”. Fair to say it’s battle-ready.

Find out more via reloop.com 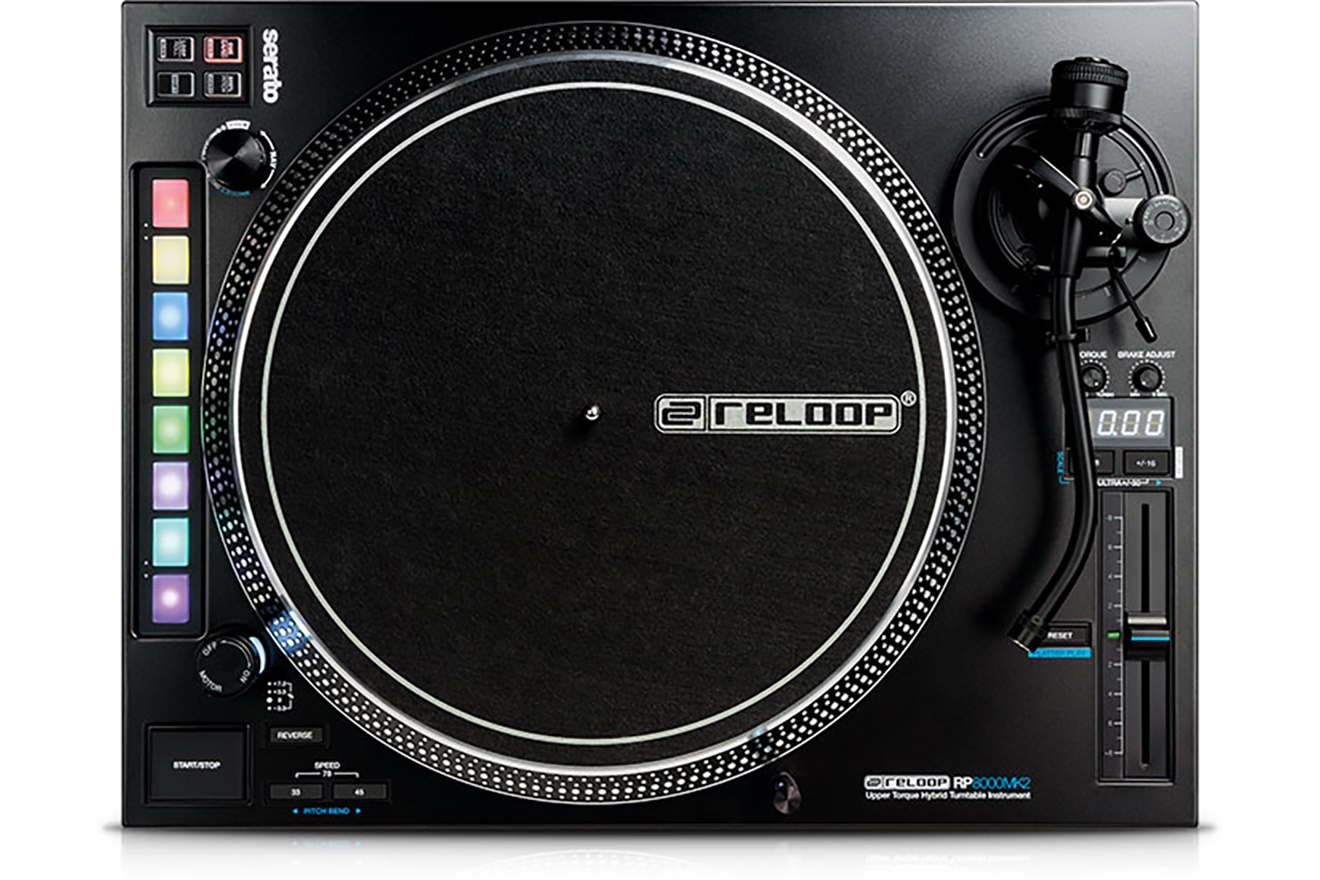 The Reloop RP-8000 Mk2 is similar to the turntable above for the first part with one significant difference: it’s an analogue and digital hybrid that’s designed for compatibility with Serato DJ Pro. As well as the vibration resistant construction and the adjustable torque and pitch control you’d expect from a good scratch turntable, the digital aspect brings a whole new raft of capabilities to the deck. It has eight large and colourful LED pads along the side that can control every MIDI compatible DJ software and even MIDI keyboards so you can “play” your turntable; it’s both a turntable and an instrument in one!

Find out more via reloop.com 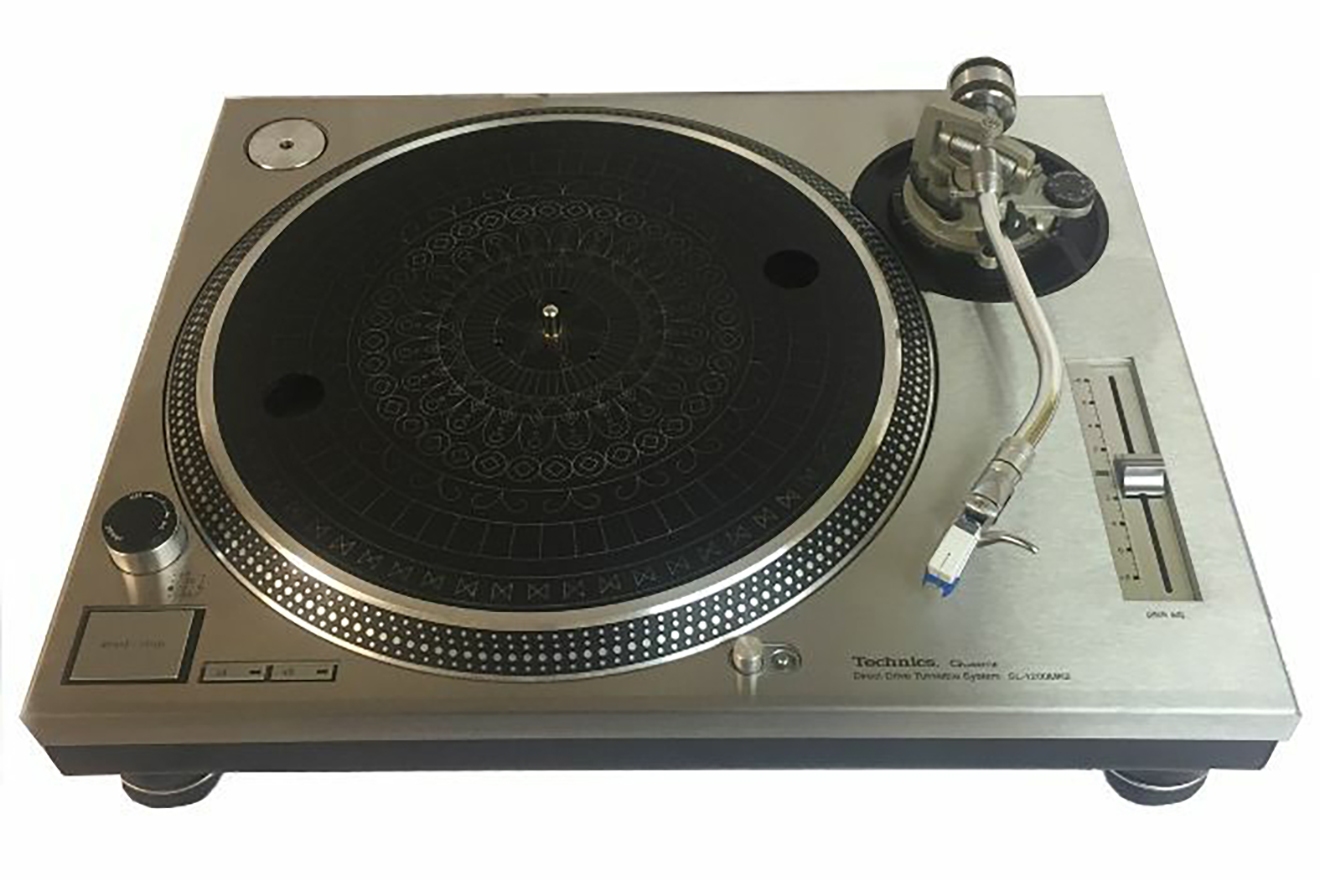 The classic. Despite being released all the way back in 1979, this turntable has stood the test of time to stay many DJs’ favourite more than four decades on. It doesn’t have the fancy gadgets some modern turntables do, but for an analogue DJ simply looking to mix vinyl records, these will never let you down. The high torque, sliding pitch control, quartz-controlled direct drive motor and heavy base which the platter is isolated from make it sturdy, reliable and pinpoint. As you might be able to guess from the longevity of this deck’s popularity, they are renowned for their durability, often praised as “the last deck you will ever need to buy”. Production of this edition of Technics was discontinued in 2010, so you get your hands on one you’ll need to search second hand and convince someone to sell up. 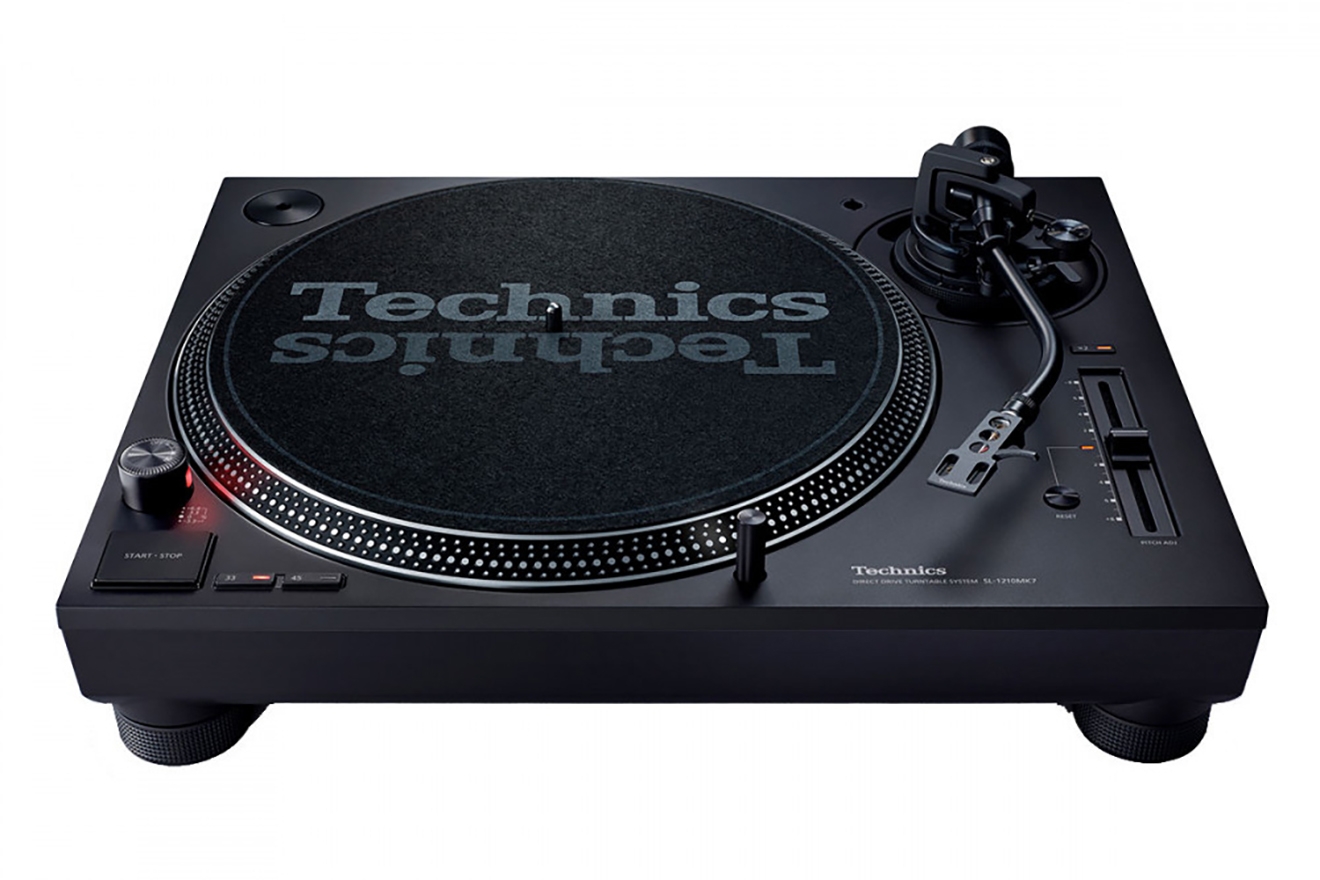 If you want a brand new and more contemporary Technics decks, the SL120 MK7 is the latest edition of the beloved series. It’s a state-of-art turntable, that features a magnetic coreless direct drive motor that is highly reliable and does not require parts replacements, providing powerful torque and precise rotation over an extended period of time, and a two-layer structure of the platter that cuts out unwelcome resonance and detrimental vibration with vibration-damping rubber across the breadth of the back surface. As with the MK2, it has the sturdiness and reliability stamp of quality assurance that makes Technics decks stand out; knowing it will work well in pretty much all settings is why DJs depend on them.

Find out more via technics.com 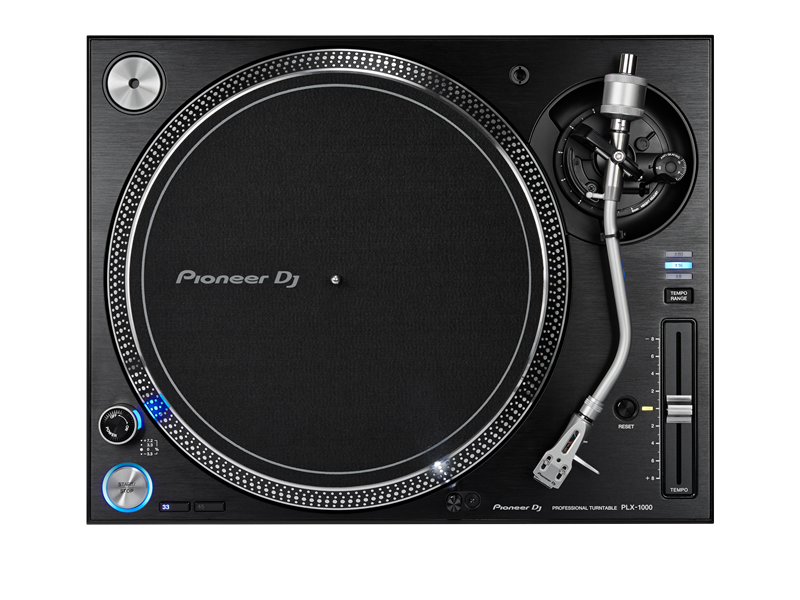 Before Panasonic announced its planned revival of Technics in 2015, tracking back on its discontinuing of the series in 2010, Pioneer looked set to make a strong claim for the new industry standard turntable with the release of the PLX-1000 in late 2014 – A-Trak bought a pair. It’s a fantastic turntable that runs Technics close, and is cheaper too.

Key features that help set it apart are its tempo control, which is adjustable to +/- 16% and +/- 50% as well as the standard +/- 8% range and flexible connectivity, with stereo RCA jacks rather than hardwired cables, making maintenance an easier issue to deal with.

It also includes a high-torque direct drive to maintain stable rotation and tight control, a weighty zinc chassis that suppresses interference from resonance and vibrations, and a rubber-insulated S-shaped tonearm that absorbs external vibrations and reduces howling effects.

Find out more via pioneerdj.com 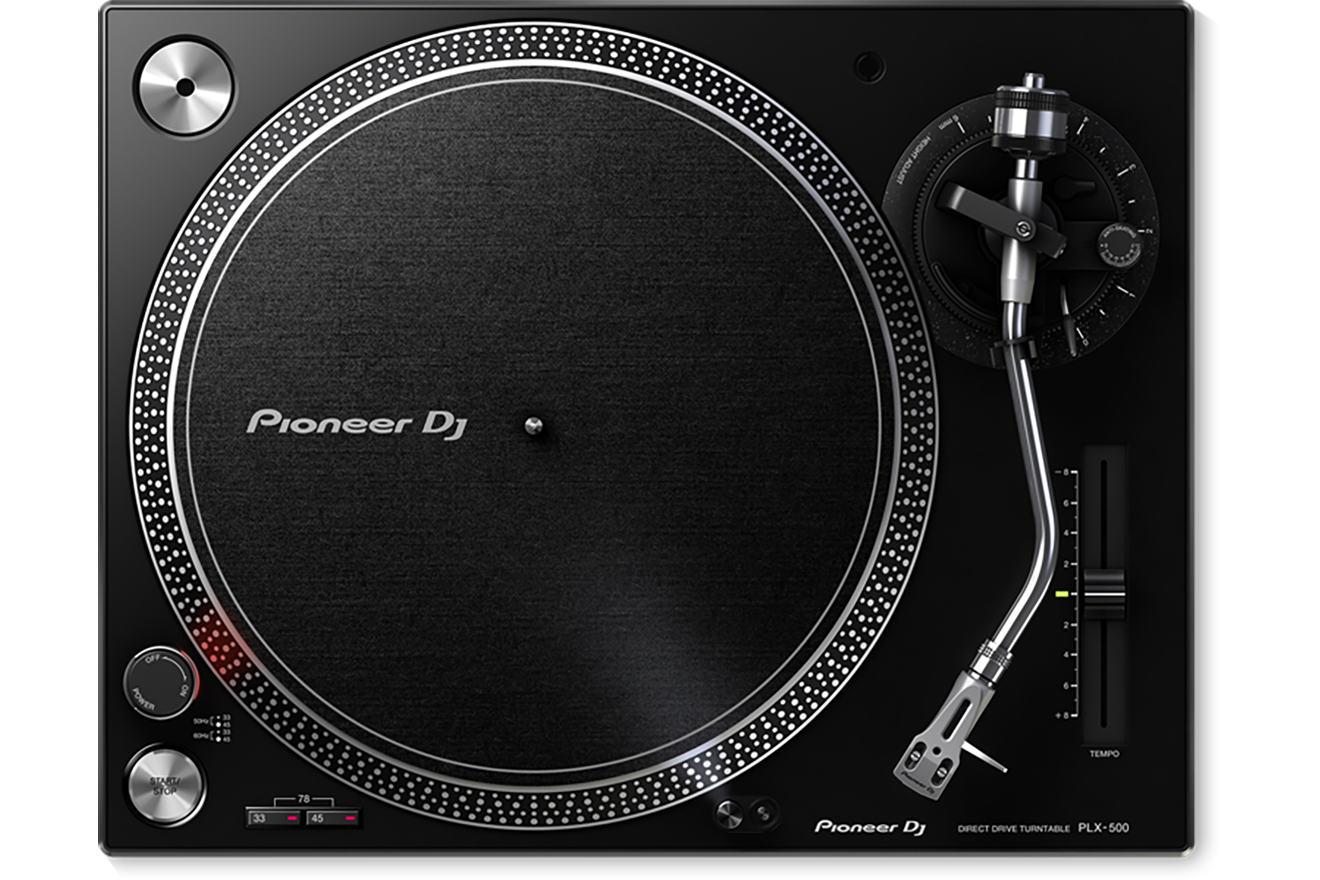 If you’re looking to get into vinyl DJing but don’t want to shell out for the top of the range kit, the Pioneer PLX-500 is a capable alternative at half the price of the PLX-1000. It’s built sturdily, produces high-quality sound, and is compatible with Pioneer’s rekordbox dvs Plus Pack which makes it possible to play and scratch MP3s via a DJM mixer and the RB-VS1-K Control Vinyl, which will suit anyone who’s still building their record collection and wants the option to play digital files.

Find out more via pioneerdj.com 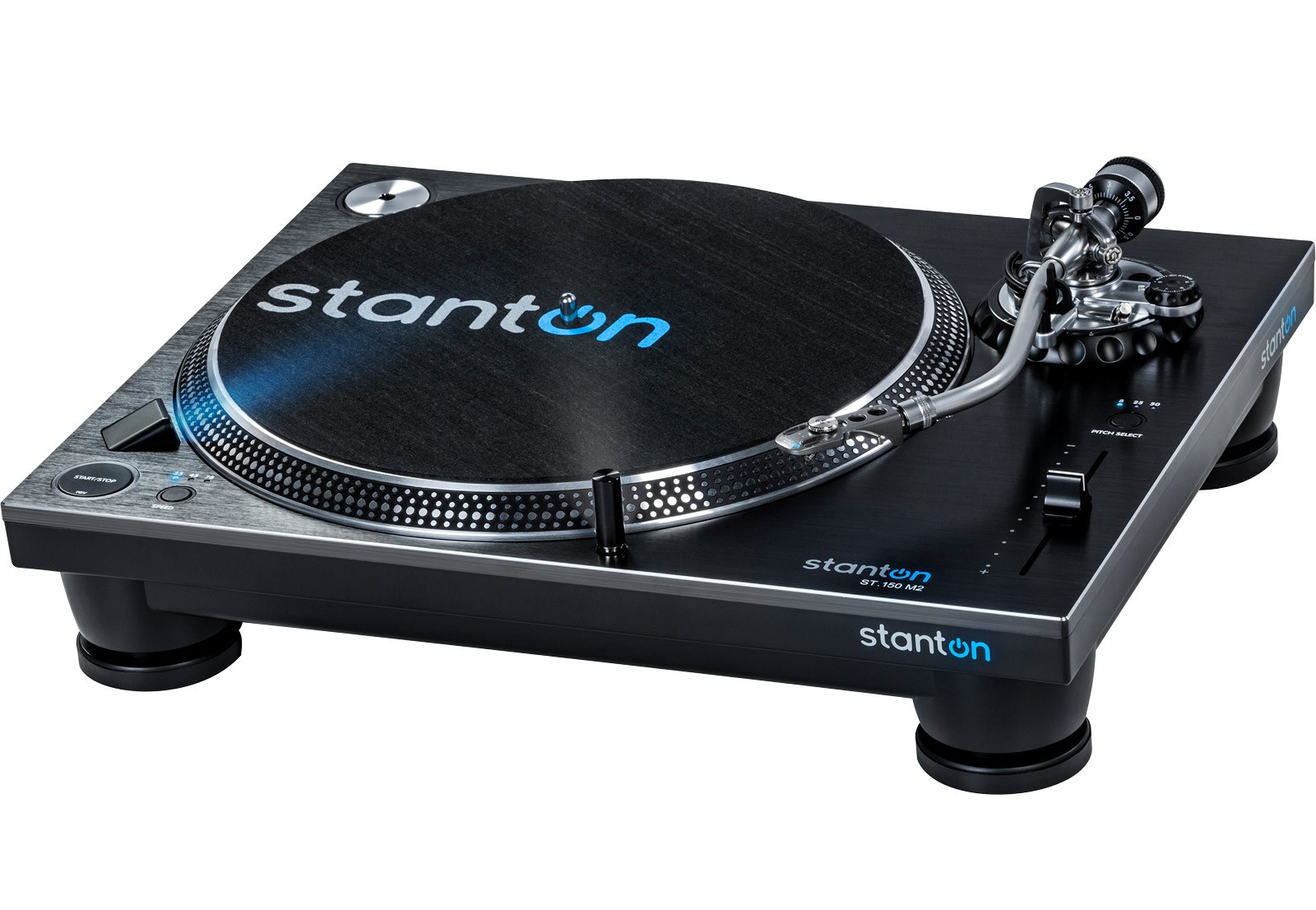 Attendees at NAMM in 2017 were treated to the news of Stanton’s fresh offerings for the turntable market, with the company announcing completely revamped editions of its ST.150 and STR9.150 turntables that “went back to basics while re-engineering these turntables from the ground up”. The ST.150 M2 looks the part with its low resonance base and sleek aluminium frame, which is 6 kilograms lighter than its predecessor. The drive motor with a 4.5kg motor torque has 33/45/78 speed settings available, there’s selectable pitch control in the +/- 8%, 25% and 50% range, and it can play records in reverse. 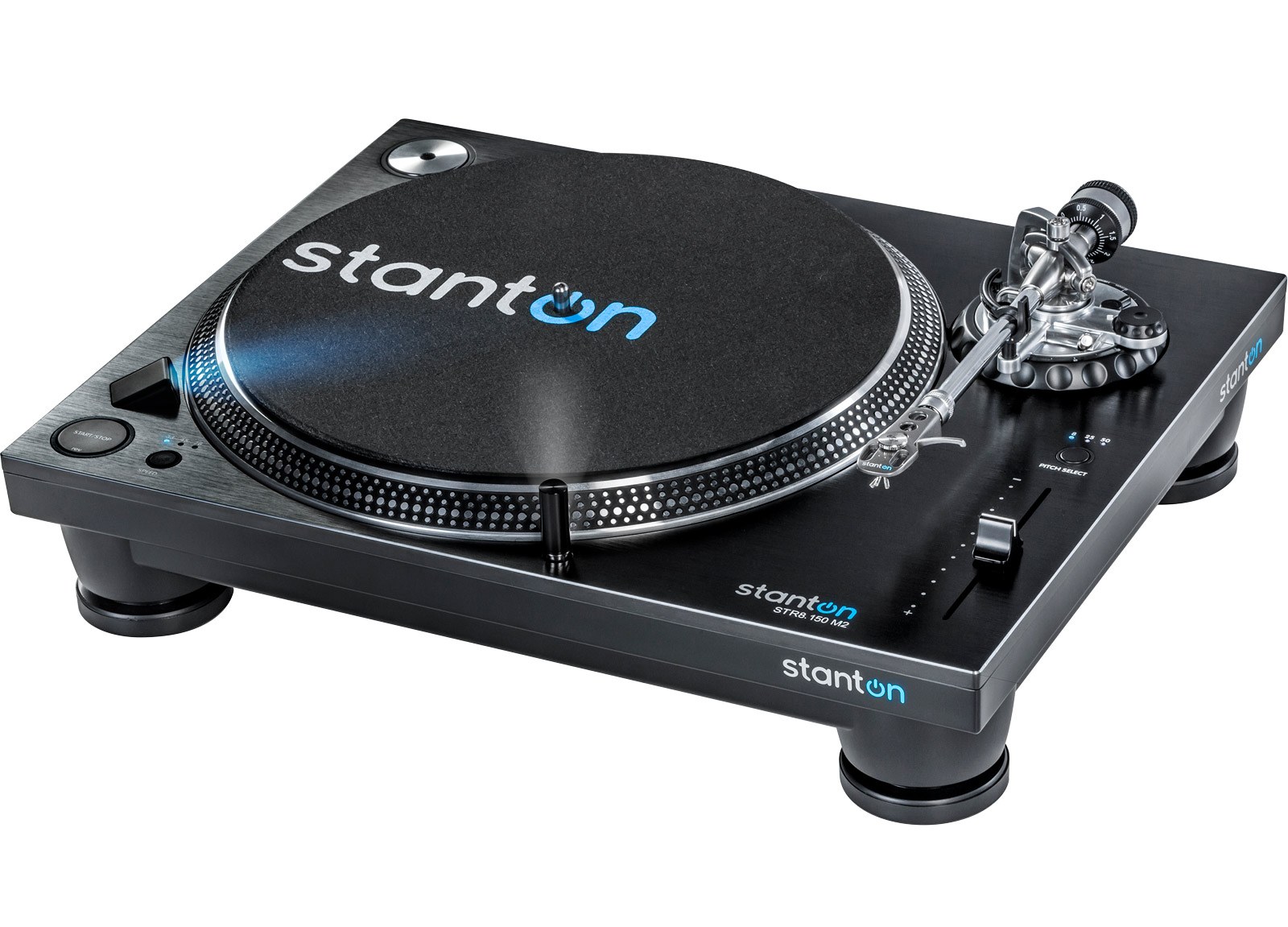 The STR8.150 M2 has very similar specs to the ST.150 M2, with the key difference being its straight, skip-proof tonearm with adjustable height. As with its sister Stanton, the turntable is built to work with the Deckadance 2 DJ Software, a powerful application that brings a number of tools to help elevate your sets to new levels, including running VST effects and sounds. 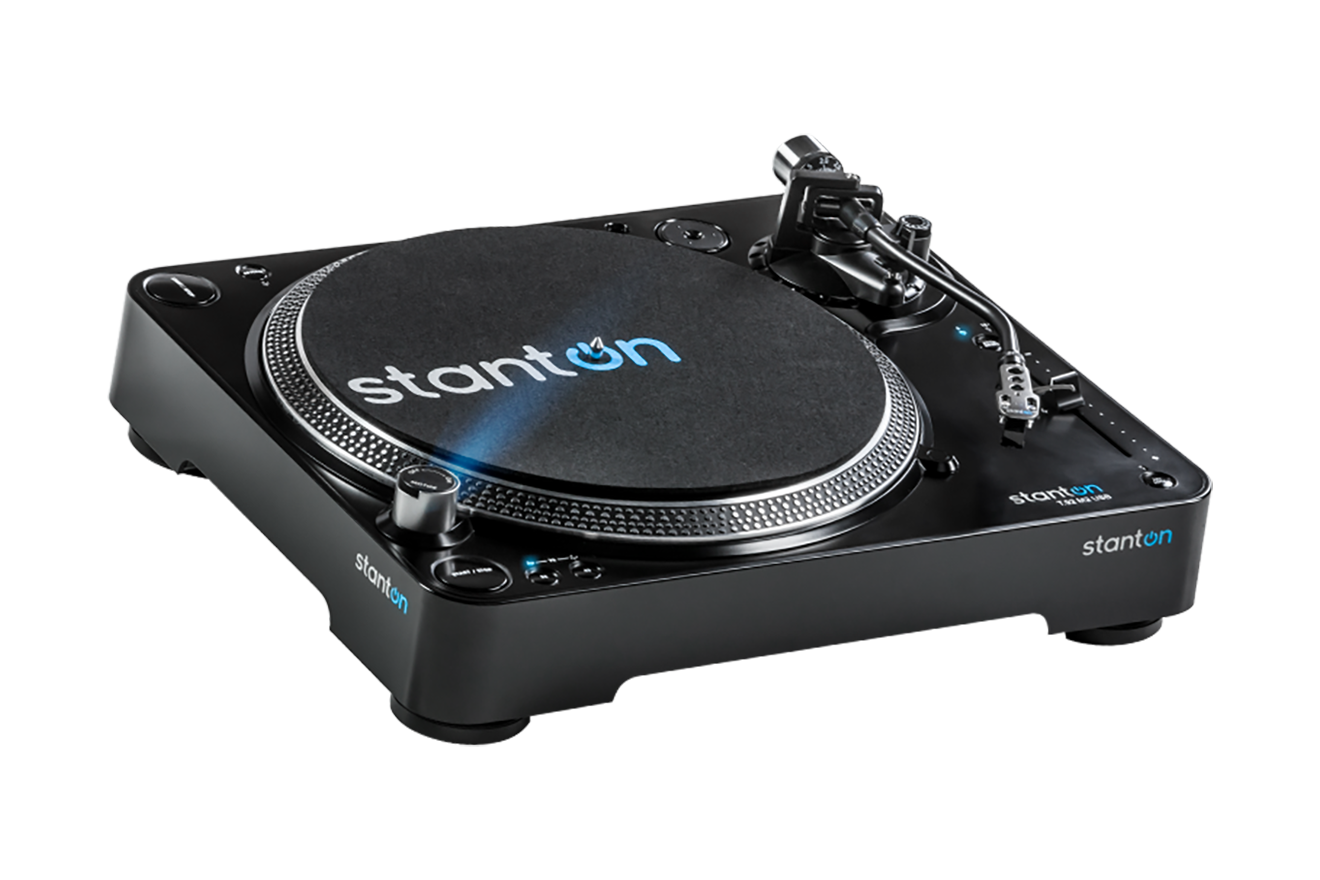 The Stanton T.92 M2 is a versatile turntable, with three playback speeds, a +/- pitch control range of 12%, and a DSP Key Lock that allows you to change the tempo without affecting the pitch. It’s also sturdily made and durable, has a USB connection for digitising vinyl files, and RCA stereo outputs for easy external link-ups. One slight letdown is the chunky design, meaning it’s not the best-looking turntable on the market. But if you’re after features over aesthetics, this is a solid budget option. 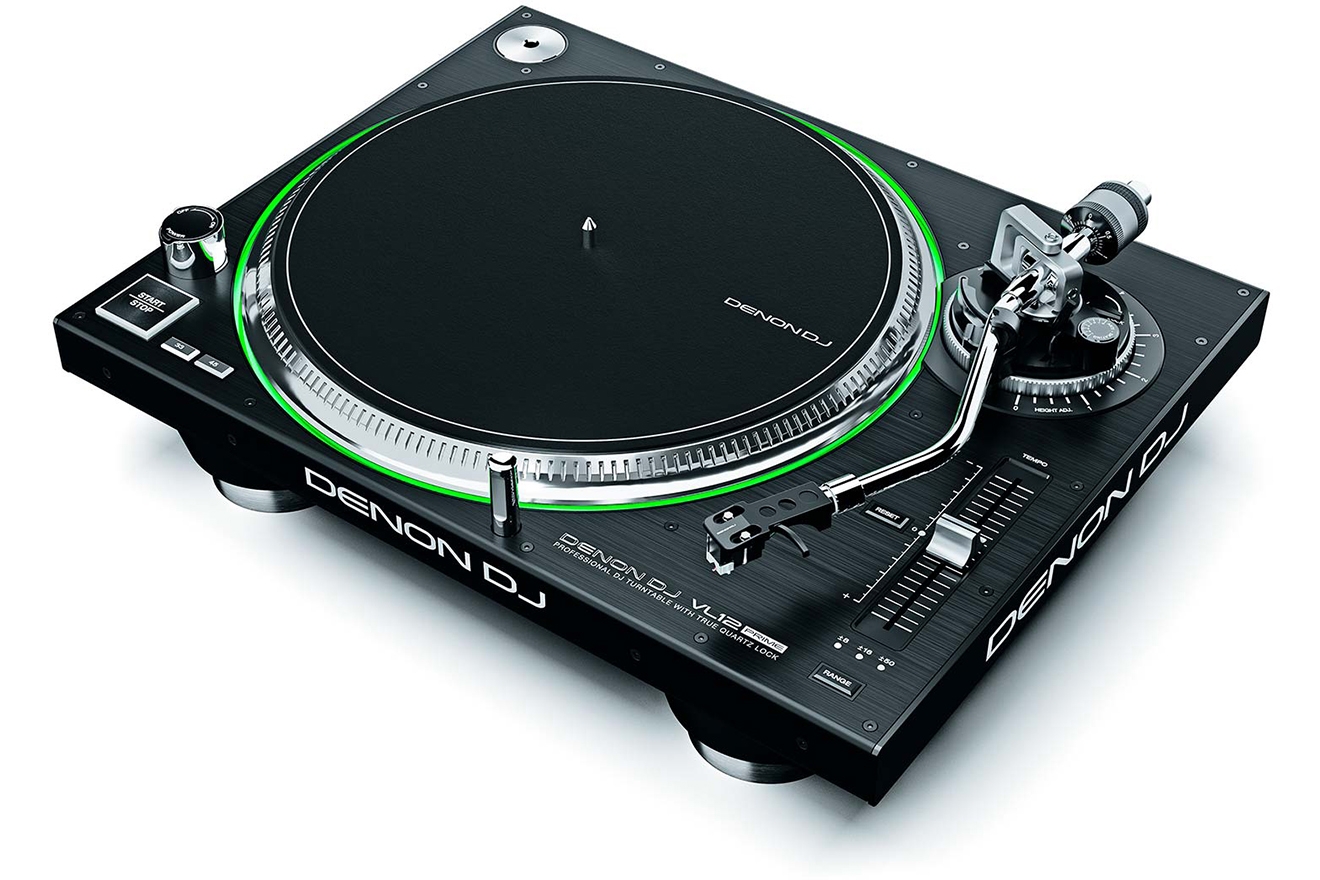 The Denon DJ VL12 Prime’s key selling point upon release is its adjustable “highest-in-industry 5kgf/cm torque” making it tailored perfectly for DJs looking to mix, scratch and cut with their turntable. The adjustable +/- 8%, 16% and 50% pitch range and ‘easy grip/brake’ chamfered platter also give it great record manipulation versatility and a tactile touch. Plus, the multi-coloured glowing LED platter ring looks great, and as scratch DJing is an aesthetically appealing style, that’s an added bonus.

Find out more via denondj.com 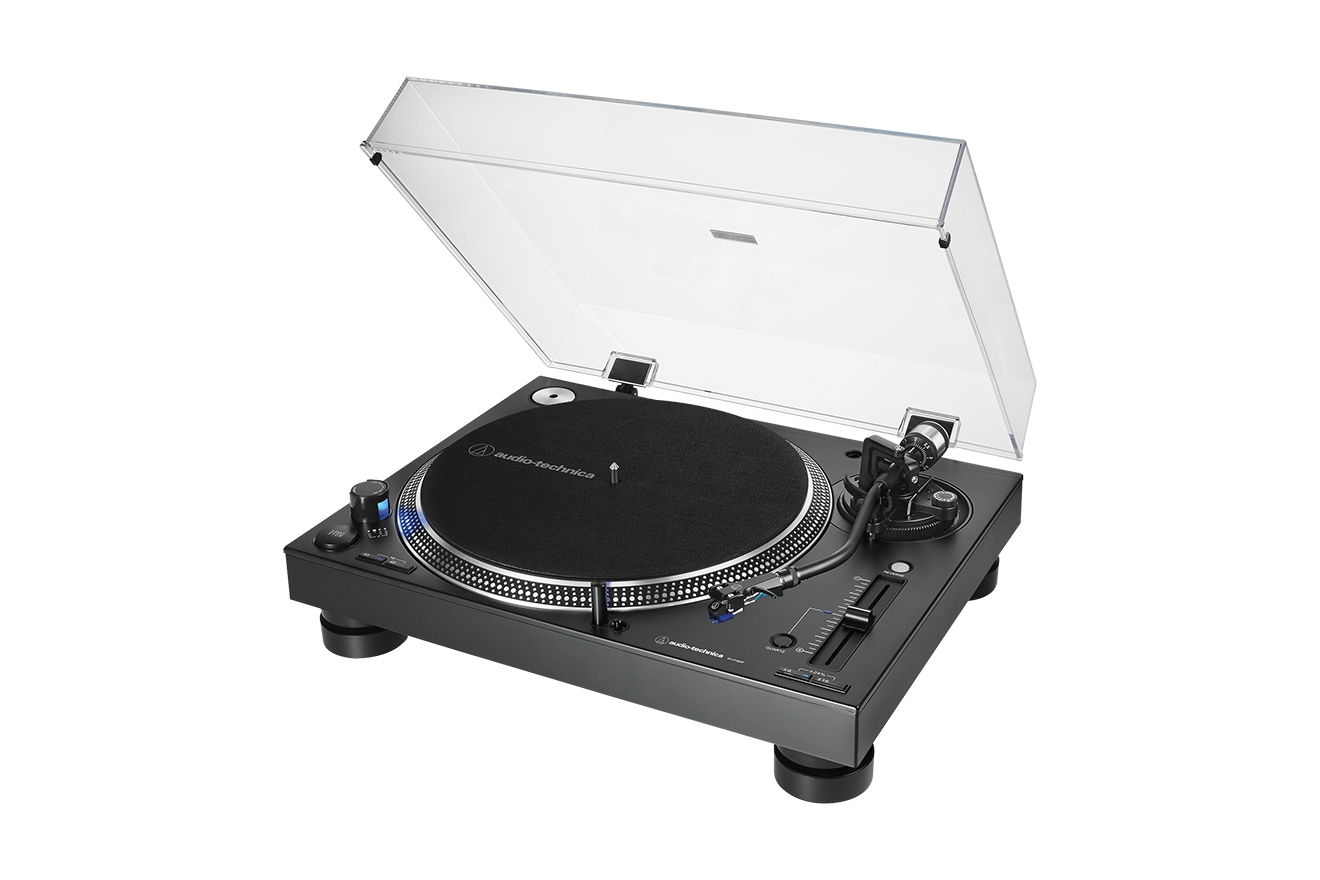 Audio-Technica’s AT-LP1240 is its flagship turntable designed for club DJs. The company was founded in Tokyo in 1962 to design and manufacture phono cartridges, and over more than half a century has built its expertise and refined its designs to achieve premium quality. Features include a high-torque direct drive motor with speed stabilisation; a sturdy, anti-resonant chassis; adjustable anti-skate control; high-fidelity audio; an S-shaped tonearm with hydraulically damped lift control, height adjustment, and lockable rest; adjustable pitch across the ranges of +/-8%, +/-16%, and +/-24%, and a removable hinged dust cover. It’s not quite up to the very top of the range standards as Technics and Panasonic, but in terms of value for money, it’s a very tempting alternative that is undeniably a well made, durable deck that’s primed for DJ functionality.

Find out more via audio-technica.com 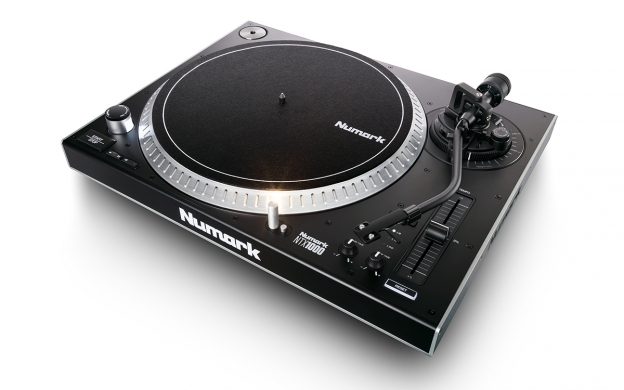 Numark’s NTX1000 packs some powerful features into a more affordable pricepoint than some of its competitors on the market. The direct-drive motor has start-up torque rated at an impressive 4kg-cm, the pitch range is adjustable to +/-8%, +/-16% and +/-50%, an accurate tracking S-shaped tonearm, and rotary control for start-up and braking time. The connectivity options are flexible, with switchable phono and line outputs, and a USB for ripping vinyl. And if unique design is a plus point for you, it also looks different to most turntables out there with more angles than the standard rectangular shape to its die-cast aluminium chassis.

Find out more via numark.com

Tagged under: THE 12 FINEST DJ TURNTABLES 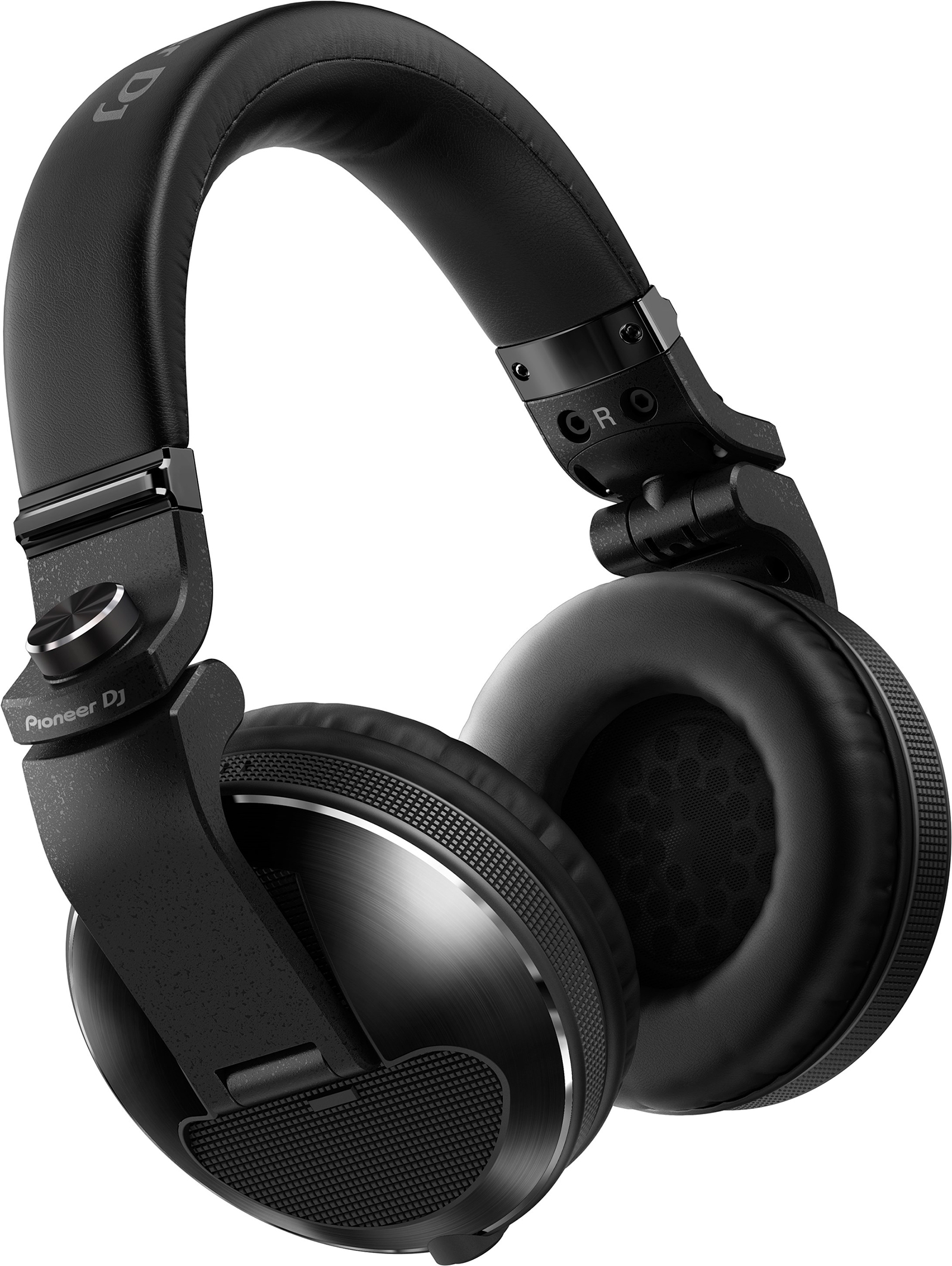