NICK WARREN in Cape Town (One Night Only) with Goldswindler! 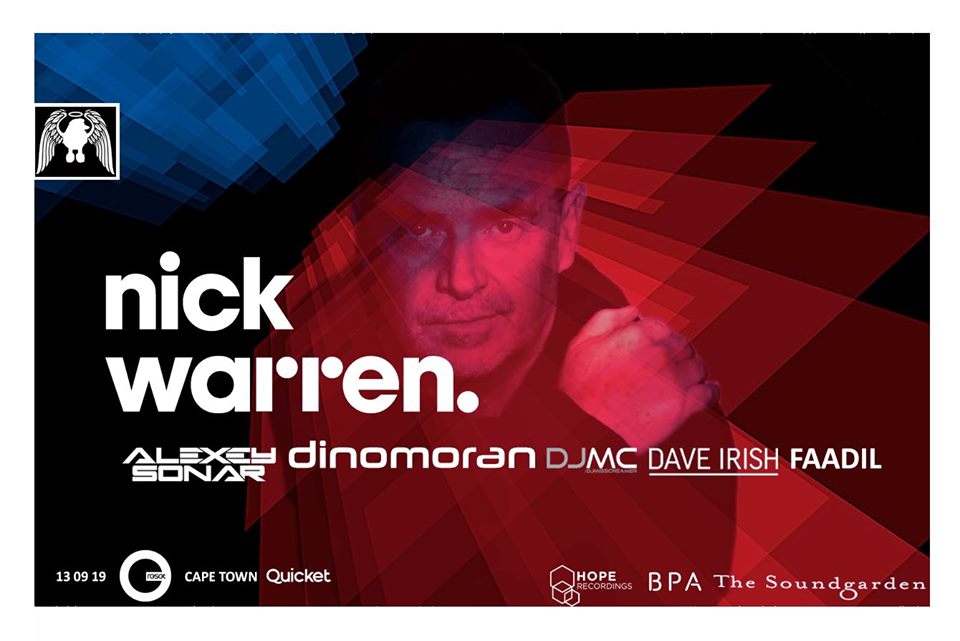 NICK WARREN in Cape Town (One Night Only) with Goldswindler!

Legendary international DJ/Producer Nick Warren is coming back to Cape Town to perform for one night only at Reset on Friday the 13th of September 2019 to perform with some of SA’s local legends.

Nick was last in Cape Town back in 2003 at Club Unity where he performed as part of the Global Under ground series of events.

Congratulation to Jason Bruwer for winning the Double Tickets.

Stand a chance to win a set of DOUBLE TICKETS to see Nick Warren Live! 😀

Goldswindlwer and Mutha FM are giving  away a sets of Double Tickets to this long await event and all you have to do is make sure you have liked the following links and add your name to the post on the Mutha FM Facebook page:

The WINNERS will be chosen at random via an online number generator and will notified on Nick E Louder’s show the LOUD & PROUD on Thursdays night at 6pm  on the last week before the event, Good luck!  😀

…on the back of September 2018’s GU Artist Series show with Dave Seaman, we are proud to announce that Nick Warren will be playing an extended set for the Cape Town massive at “Reset Club” with it’s unbeatable quad Funktion One sound system on Friday the 13th September 2019…

On the back of sell out gigs across the world, notably belting out his more progressive journey sets at Rainbow Serpent, Amsterdam Dance Event, his own brand of Soundgarden Parties and many more, Nick is flying in to play at one of our limited numbers parties.

Nick is at the top of his game, touring the world with his arch companion Hernan Cattaneo and delivering to massive dance floors, this intimate limited numbers party is a rare occasion for a DJ of his status.

We have also, very carefully, selected 2 pioneers of the Cape Town electronic music scene to build the perfect lineup to support Nick and deliver a journey of music for this special party.

Dino Moran & Faadil really are legends who built the foundation of the progressive house and techno movement during the 90’s and early 2000’s when Nick Warren was performing as an artist with Massive Attack, going on to record albums with Global Underground and forming labels like Way Out West with Jody Wisternoff.

And as if that 3 DJ powerhouse isn’t enough, due to a huge number of requests from those who missed New Money Russia:2 in December, we decided to go for GOLD and build a 2nd lineup to include the trio who will compliment the perfect progressive journey together for one final vodka fueled blast off:

Dave Irish is a unique selector and mixer of music. He demands perfection when curating and preparing his sets and has quickly emerged onto a wider stage. His sound is defined by an authentic interpretation and nuanced delivery of Techno which incorporates deep and melodic elements with powerful basslines and off-center sonic anomalies.

Having played for more than 8 Goldswindler parties, Monique is in our opinion the best female progressive tech house DJ in the country. She recently supported Alex Cruz and blew the crowd away. We’re looking forward to her set.

Alexey is a promoter, record label owner, producer and top progressive DJ in Russia. He has played with most of the top artists on the International Scene, including Nick Warren, and will join this line up after playing in Cape Town where he has a big following.

We are are honoured that they accepted to join Goldswindler for this.

Please click HERE to get your TICKETS from Quicket 😀

This is a limited capacity event and will sell out fast.

NO TICKETS ON THE DOOR
ONCE THEY ARE SOLD OUT, THAT’S IT

Tagged under: Nick Warren, WIN Double Tickets to see NICK WARREN in Cape Town (One Night Only) with Goldswindler!