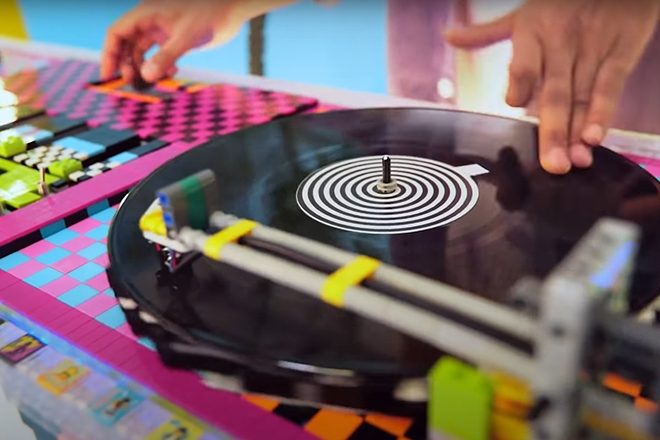 This gives new meaning to building up your set 😉

Yes we all like to play with Lego growing up, but this is taking it to the next level of playing ;D Check out a video of the decks in action below!

The Danish toy brick company commissioned the Kent-based artist to build the turntables and shared a five minute video of the process.

The whole setup is made out of LEGO, save for the circuit board, mixer and decorative LEDs. There’s even spiral-designed LEGO slipmats.

4000 bricks make up the outer case, four motors control the rotation of the platters, and there’s even sample pads hooked up to sound effects. The electronics are made from LEGO Mindstorms, a programmable robotics system designed to work with LEGO products.

After Look Mum No Computer finishes the “long build”, DJ L.L.A.M.A performs a mini set on the decks, complete with scratching and klaxon sound effects.

LEGO commissioned the project to promote its new LEGO VIDIYO app, which allows users to create and star in their own music videos using state-of-the-art augmented reality technology to bring miniature LEGO figures to life.

This isn’t the first time LEGO and dance music worlds have crossed over. In 2014, coder Alex Allmont made a LEGO creation that plays its own version of acid house. Berlin-based company Numode has also released custom LEGO replicas of the Technics 1200 and mixer, TB-303, MPC-2000XL and TR-808. There’s also been modular synth cases and a record store made out of LEGO. WHAT HAS THE MUSIC INDUSTRY ACTUALLY LEARNED FROM THE AVICII TRAGEDY? GOLDIE ON HIS CELEBRITY STATUS: “IT TROUBLED ME INCESSANTLY”